Bill and Doreen, residents of Abbeyfield House in York recently celebrated their Platinum Wedding Anniversary after 70 years together. 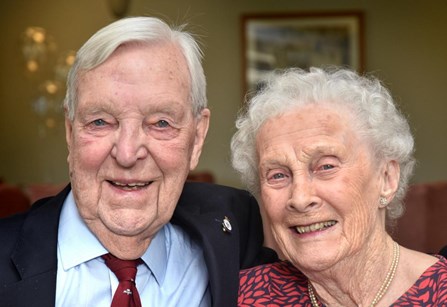 The couple first met as they were both members of the York Rambling Club. They lived in Clifton area of York together for the majority of their lives and have one son together, named Mike. They have two grandchildren and one great grandchild.

Bill was part of the Para-trooper Regiment during the Second World War, where he was based in Greece. He then worked in both the local government and in the estate office at the University of York.

Doreen worked as an occupational therapist at York General Hospital. The couple are social members of the Clifton Alliance Cricket Club and regularly go to watch during the summer season.

Bill said that he believes that there are a couple of factors to sustaining their long-lasting marriage.

“We have been lucky to both have reasonable health. We have both led very active lifestyles and we have always had great friends.”

The couple had a lovely afternoon celebrating with around 60 of their friends and family, fellow residents and staff. There were home-made canapés, wine and a celebration cake, yum!

Congratulations Bill and Doreen from all of us at Abbeyfield!

How we can support the older generation during COVID-19

Wondering how you can help the older generation? Try our support cards and read about other ways you can show your support.

Keep in touch | A guide to video calls

Don’t lose touch with loved ones! Keep in touch with video calls – it's quick and easy to do. We've put the below guides together for those who are just starting to learn video calls.

10 tips to stay productive when working from home

Because of the coronavirus outbreak, many of us now need to work from home to try and slow the spread. Turning your home into an office can be difficult, so we've listed some of our top tips to help you remain productive whilst working at home.