There were cheers and high-fives all around as 94-year-old Mary Walker scores her first ‘run' after going in to bat in a brand-new version of cricket developed for older, less mobile players.

There were cheers and high-fives all around as 94-year-old Mary Walker scores her first ‘run' after going in to bat in a brand-new version of cricket developed for older, less mobile players.

Mary, who is registered blind, was the proud team captain of her winning ‘Yorkshire’ side in a Clock Cricket match, a new sporting concept that is putting a different spin on the centuries’ old game.

Former munitions worker Mary, along with fellow team members including Donald - who is well on his way to becoming a 100 years-old and not out – are residents at Abbeyfield The Dales’ award-winning Fern House in Bingley, West Yorkshire. Introduced to The Dales' by Abdul A Ravat, Head of Development and Relationships at Abbeyfield, the residents were among the first in the world to play Clock Cricket which has been developed to enhance the physical and mental wellbeing of older people living in care homes.

Mary said, “It’s been absolutely wonderful. I’ve enjoyed everything. I’ve never played cricket, but my Dad always loved it. I didn’t think for a minute I could throw or hit a ball – I am registered blind. I’ve always been the sort of person to have a go at everything – I don’t just want to be sitting around. I’ve never been a team captain either – wait until my kids find out!”.

The game, which is the brainchild of Richard Hill, the England and Wales Cricket Board’s (ECB) Disability Cricket Support Officer, is played indoors using a sponge ball and a foam bat. A social, fun and competitive pursuit aimed at encouraging the less able or active to take up a physical activity or try something new, players sit in a circle and face four balls each to determine the winner.

Independent of, but supported by the ECB, Clock Cricket has been trialled to great acclaim in Richard’s home county of Hertfordshire. Now older people in Yorkshire, where there has long-been a strong cricketing tradition, are being bowled over by the game and are helping drive it forward across the UK.

Richard said: “Clock Cricket works on so many levels. We can engage with people who potentially suffer as much from loneliness as much as lack of physical activity. It allows people to have a laugh together, form relationships and involves people interacting together instead of sitting in their rooms. It can be played by both men and women, helps break down social barriers and promotes a sense of team spirit and competitiveness. Physically, it can help to improve hand-eye coordination, dexterity and body strength and gets you moving.” 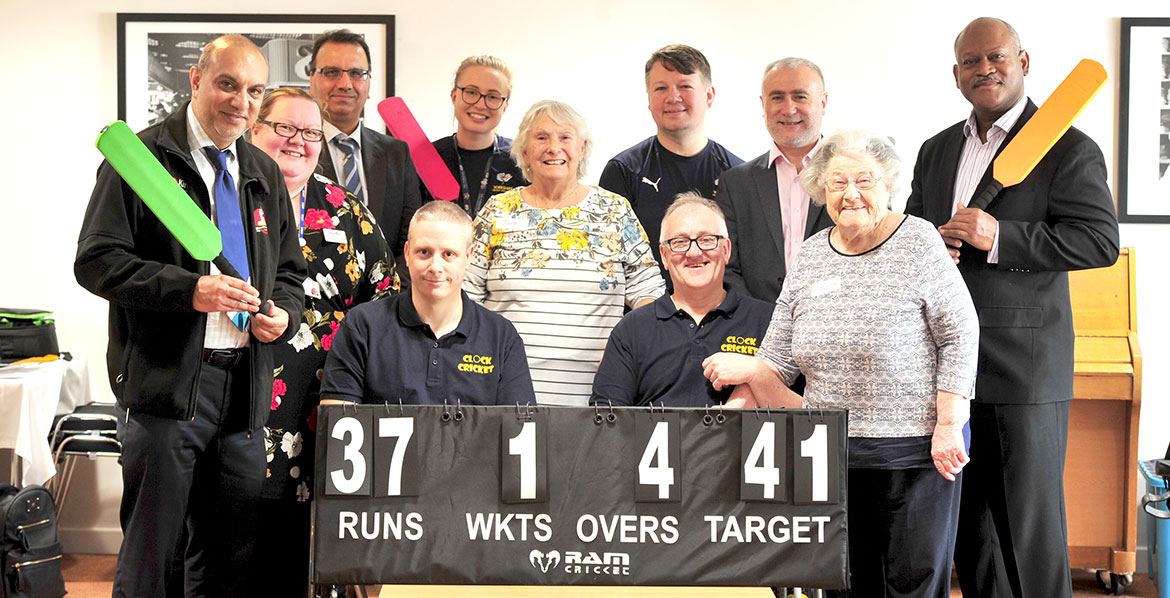 Nicola Taylor, Head of Care Services for Abbeyfield The Dales, hopes Clock Cricket will not only encourage residents to remain physically active but will continue to help break down social isolation among older people.

She said: “We are all about the opportunities we can give our residents to take part in meaningful activities and Clock Cricket delivered that in the bucket load. This truly was a fantastic day for our residents. We had people joining in today who have shown little interest in any other activities. But they came back for a second session and in fact they became very competitive!

“We are very passionate about giving our residents meaningful activities and opportunities to come together that will improve their mental and physical wellbeing. We see Clock Cricket as a great means of achieving this.”

Clock Cricket will be rolled out to not just Abbeyfield The Dales’ fellow Yorkshire independent living and care homes, but across Abbeyfield’s 500 other houses in the UK and overseas.