To celebrate International Volunteers Day, we're showcasing some of our wonderful volunteers from across the globe who have been recognised for the hard work, time and commitment they have dedicated to Abbeyfield.

Abbeyfield Canada was pleased to recognise the years of hard work and volunteer efforts made by three long-time volunteers.

At the 2021 annual meeting, awards committee chair Andrea Geary announced that Molly Cowie, of the Houses Society of Prince Albert, and Margaret Naylor, of Abbeyfield Houses of Vernon Society, were chosen to each receive this year’s Robert McMullan Award for Lifetime Volunteering Excellence. Marlene Dietrich, of Alberni Valley Society, was also given an Abbeyfield Champion Award to recognise the many years that she and her late husband, Phil, volunteered and supported at the House in Port Alberni.

The award, which recognised Molly's work on behalf of the Abbeyfield Houses Society of Prince Albert Inc., was presented by Society president Sylvia Gent on behalf of Abbeyfield Canada. Molly has served on the Abbeyfield Houses Society of Prince Albert since 1996. With a background in health care and many community connections, she greatly contributed to the fundraising and planning needed to build and open the Abbeyfield Prince Albert House at 190 26 Street East. She initially joined the Society's board as fund-raising chair and volunteer coordinator. She participated actively in public presentations to local service clubs and organizations, helping with the Rotary Club's donation of land for the Abbeyfield House. Her many community contacts were valuable in attracting the House's first residents and ensuring the House's financial viability.

As well as serving on the board, Molly is also very involved with Abbeyfield residents. She started, and has continued, the House's history book that includes a page for the personal history of each resident over the past 21 years. She also maintains the House's waiting list, conducts tours, and identifies prospective residents. The House's community room is named the Molly Cowie Community Room in recognition of her extensive and ongoing work.

Margaret received the Robert McMullan Award for Lifetime Volunteering Excellence from Abbeyfield Houses of Vernon Society president Nicole Kohnert, who presented the award on behalf of Abbeyfield Canada. Margaret served on the Abbeyfield Houses of Vernon Society's board as secretary for many years, and only recently resigned. She also took the lead on numerous fundraising events and encouraged community members to join her in supporting the Abbeyfield Vernon House at 3511 26 Ave., and its residents and staff; forming a close bond with the House's residents.

Marlene was given the Abbeyfield Champion award by Alberni Valley Society board president Dave Cowan on behalf of Abbeyfield Canada. Marlene and Phil were involved in the start up and refurbishing of the old Port Alberni Hospital's extended care wing into a 20-room Abbeyfield House at 3839 8th Ave. in 2001 to 2002. They worked with other volunteers to open the House and welcome the first residents in August 2003.

Marlene joined the House's board of directors, and Phil was invaluable in helping with House maintenance and repairs for years. At various times, Marlene served as the board's president and secretary-treasurer, and for many years, has been treasurer of the B.C. Abbeyfield Chapter and was involved in the B.C. Abbeyfield Trust. She retired from the Port Alberni House board in 2021.

Martin Stephenson and Terry Foster  have been recognised for their outstanding contribution to Abbeyfield. They have received the Royal Patron’s Award – an award made by The Abbeyfield Society in the United Kingdom. Just three of these awards were given out this year outside of the UK. The awards were presented at the recent Abbeyfield New Zealand conference. 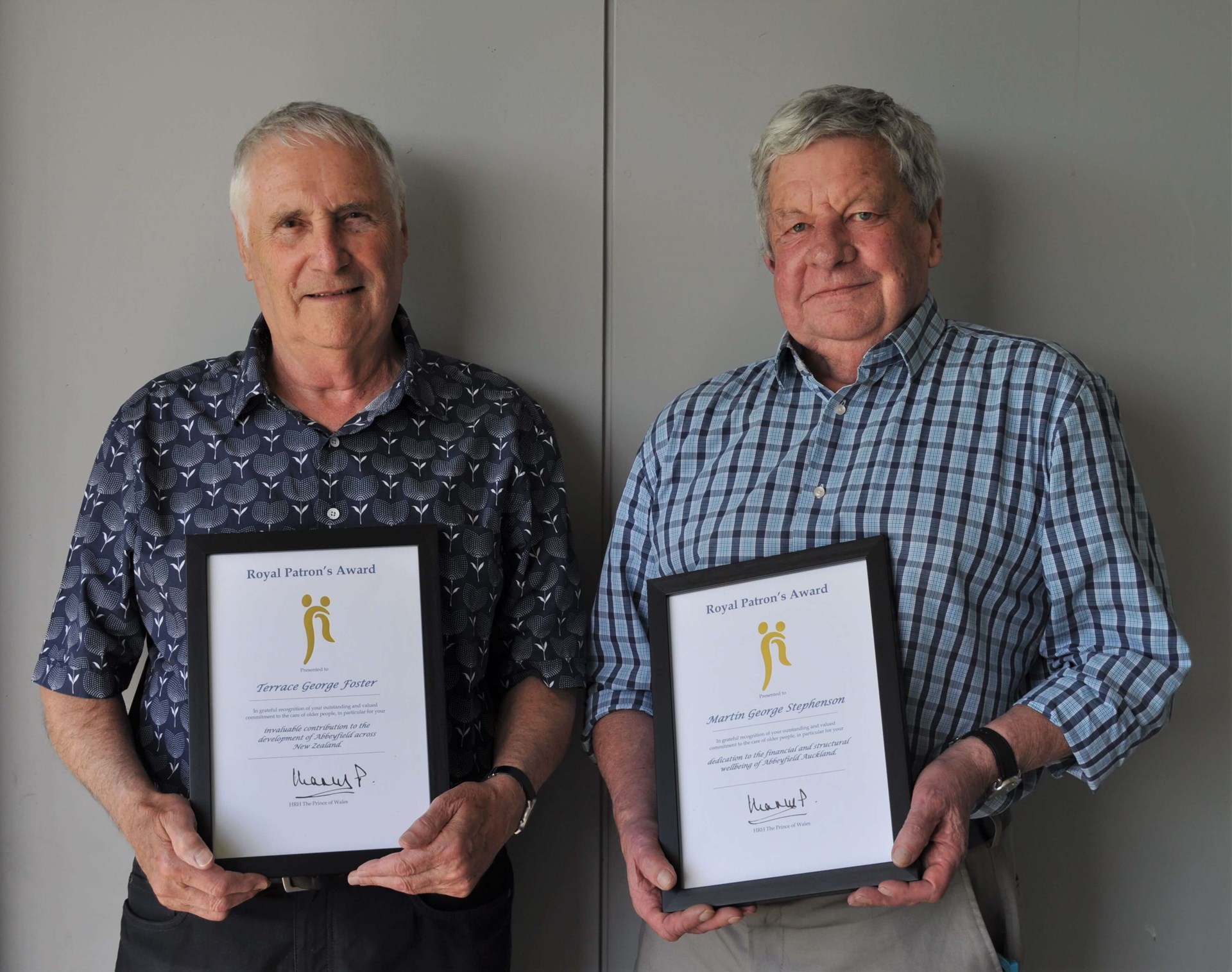 Terry, pictured left, has played a leading role in the development of Abbeyfield across New Zealand, and has been actively involved in the construction of five Abbeyfield houses, providing expertise in housing design and project management on a voluntary basis. He has also served as secretary and chair of Abbeyfield Auckland and is a director of Abbeyfield Properties Ltd.

Trustees and volunteers play an important part in our home and becoming one can be such a rewarding way to make a difference.