Ken and Doris met 74 years ago on Easter Saturday. For their first date they decided to go for a walk and tea in the park and fell in love. Four years later, Ken proposed.

Ken and Doris met 74 years ago on Easter Saturday. For their first date they decided to go for a walk and tea in the park and fell in love. Four years later, Ken proposed.

They were married on 11th September 1948 at 11am in St John’s Church, Cullingworth, Bradford with three bridesmaids dressed in white, a best man, one usher and 40 guests. It was a lovely autumnal day enjoyed by all.

Their reception was help in the church school room where guests enjoyed a meal of cold ham salad followed by a traditional fruit wedding cake. Ken and Doris kept the top tier for the christening of their first child. 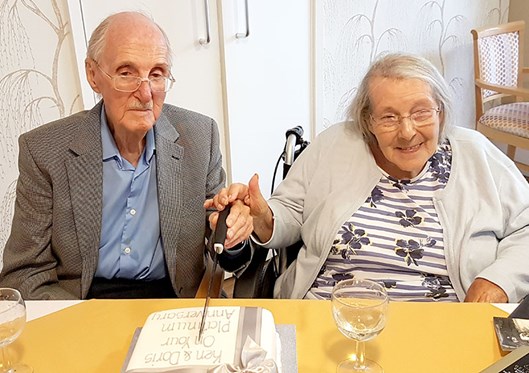 Doris became pregnant two years after their wedding. In December 1950 Ken was waiting at home

for news of the birth of his first child but when he phoned the hospital to find out how everything was going, he was told that he didn’t have just one baby, but that Doris had given birth to twins!

The twins were named and taken home to start life as a happy family of four.

Ken and Doris have just celebrated 70 years of marriage whilst living at Jim Gillespie House, Rugby. Their platinum wedding anniversary was spent with friends and family opening gifts and cards, including one from the Queen.

We hope you'll join us in congratulating Ken and Doris for such a huge milestone and wish them continued love and happiness.

World Vegetarian Day 2022: How you can get involved