True love which lasts a lifetime

Meet Geoff, a 92 year old retired British Army Major, and his wife Sybil, who is “89 years young”, and worked as a Secretary for The National Trust.

Geoff and Sybil have been happily married for 67 years and live together at Abbeyfield’s independent living complex, Girton Green in Cambridge. After meeting at a hockey festival in the seaside town of Paignton, Devon, both Geoff and Sybil knew they had found the one – so much so that it was practically love at first sight.

Sybil said, "I remember our first kiss. After which I put my head on his shoulder and he told me about his favourite place in the world."

After courting for some time, Geoff proposed to Sybil on the Dawlish Coast. Geoff said, "I didn't quite know if I would propose or not. But half way along, when no one else was around I asked Sybil, 'Will you marry me?'. And I think, but I can't remember very well, whether I went down on one knee or not, but I suspect not as the sand was very wet."

However, being in the Army meant Geoff had to first get permission from his Commandant to marry. After seeking and gaining the approval Geoff and Sybil set a date to marry, although it was a tricky task considering how busy Geoff was in his career. On speaking to the vicar they agreed to marry at St Leonard's Church in Exeter on the 27th December 1954.

On his wedding Geoff said, "The wedding was very informal with a small number of guests as you can imagine. And I'm wearing my best uniform complete with sword."

Today they have two children and four grandchildren, all of whom they hope experience the same love and happiness they have over the years.

When asked what it meant to them to be able to live together at an Abbeyfield house, Sybil said:

"It means so much for us to be able to live together in the security and safety of an Abbeyfield house. The staff are fantastic, they look after us so well and we love them to bits!"

Similarly, Geoff also felt it is wonderful to be able to live together in retirement adding, "We received a great welcome when we arrived at Abbeyfield, just what we wanted. We are also treated with great courtesy by all of the staff and are amazed by how efficiently they run the home. I can't ask for anything better than living together at Girton Green."

Watch our full Q&A with Geoff and Sybil below.

At Abbeyfield, we understand how important it is to live with your loved ones. That's why we have homes all across the UK that are able to accommodate couples.

There are so many benefits of downsizing from a house to a retirement living community as a couple. Here are a few of those benefits:

We've picked out just three of our houses with rooms to accomodate couples but you can also search for a home near you by postcode and enquire with the house directly.

Abbeyfield House is a sheltered housing facility located in the popular seaside town of Great Yarmouth, one of East Anglia's best beach resorts.

Cunningham House is a dementia-friendly residential care home located in a village in North Weald Bassett, Essex. The house has 54 bedrooms, 33 of which are en-suite. 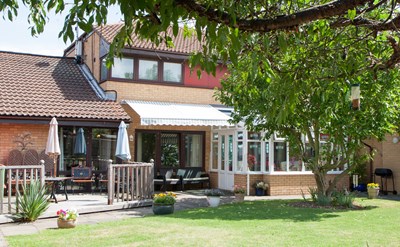 Browns Field House is a dementia care home nestled in a quiet residential area of Cambridge offering tailored and personalised care to meet your individual needs.