Sharon and Ozzy; the rare breed turkeys could have been forgiven for thinking it was, in the words of Black Sabbath, the "End of the Beginning" for them with Christmas just around the corner! But the feathered duo who share their names with frontman Ozzy Osbourne, and his TV personality wife Sharon, have managed to escape the festive dinner plate thanks to the kind heartedness of our staff and residents at Abbeyfield’s Armstrong House in the picturesque Northumberland village of Bamburgh. 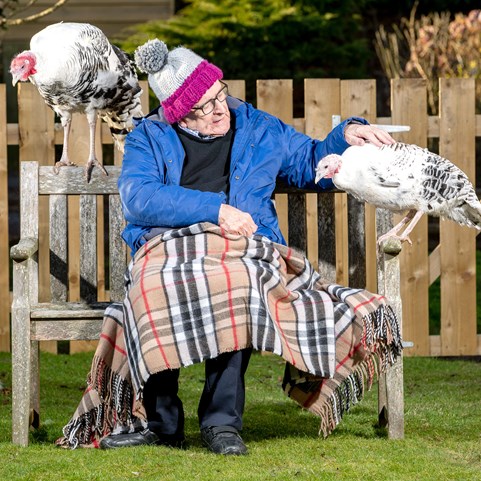 The fortunate fowls have joined a growing menagerie at the supported housing facility overlooking iconic Bamburgh Castle. The home, managed by Abbeyfield Bamburgh, already has two cheeky alpaca brothers called John and David, as well as a flock of hens, who roam the grounds.

Now Sharon and Ozzy are revelling in their newfound freedom and looking forward to enjoying Christmas without the fear of being given the chop.

The black and white Cröllwitzer turkeys owe their lives to House Manager Paula Lingwood who had ordered a free-range turkey for the house’s Christmas table. But as time went on, decided she wanted to give the turkey a pardon and have it as a pet instead to join the house’s menagerie.

She says, “I’d hear about Trump’s turkey pardon and couldn’t stop thinking about the turkey we’d ordered for Christmas and knew we’d be able to give it a lovely home instead. If Trump can have turkeys at Gobbler’s Rest, we can have turkeys here at Armstrong House.

“Of course, you can’t just have one, so we’ve now got the pair of them, who will be gobbling up their festive dinner along with the rest of us safe in the knowledge that unlike others of their breed, they won’t be the main focus of the Christmas Day – or any other day’s – menu.”

Sharon and Ozzy have been so named because of their flamboyant appearance with their contrasting black and white feathers and fondness for strutting around as if they already rule the roost.

The plucky poultry have quickly won over the hearts of Armstrong House’s residents.

They’re part of the family now. They are quite sociable and inquisitive, and come up to you to be fed. It’s nice to see live animals roaming the garden, and having the alpacas, hens and now the turkeys really helps to lift the spirits. We all hope Sharon and Ozzy will be around to enjoy many more Christmases with us. 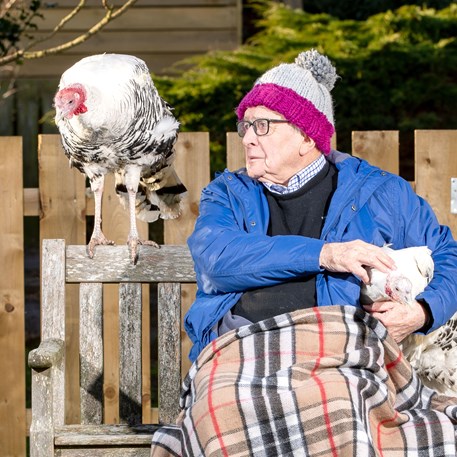 Wild turkeys can live for up to five years, but some domesticated ones have been known to survive into their teens, which means all being well Sharon and Ozzy could notch up many more festive seasons between them.

Paula admits the turkeys have been ruffling a few feathers since their arrival at Armstrong House. “They have very quickly settled in and have been wandering around like they own the place, to the disgust of the hens.

“Sharon is definitely the boss, much like it seems to be in the real-life Osbourne partnership!”

The pair can look forward to being thoroughly spoilt over the festivities. “We have a few treats lined up for them,” Paula adds. “They like fruit, nuts, cabbage and lettuce leaves, so they will be getting plenty of those to feast on.”

But what will the staff and residents at Armstrong House be sitting down to on Christmas Day?

“Definitely not turkey!” Paula says. “The only cooking Sharon and Ozzy will be involved in from now on is concocting their next bit of mischief. These turkeys are for life, not just for Christmas.”