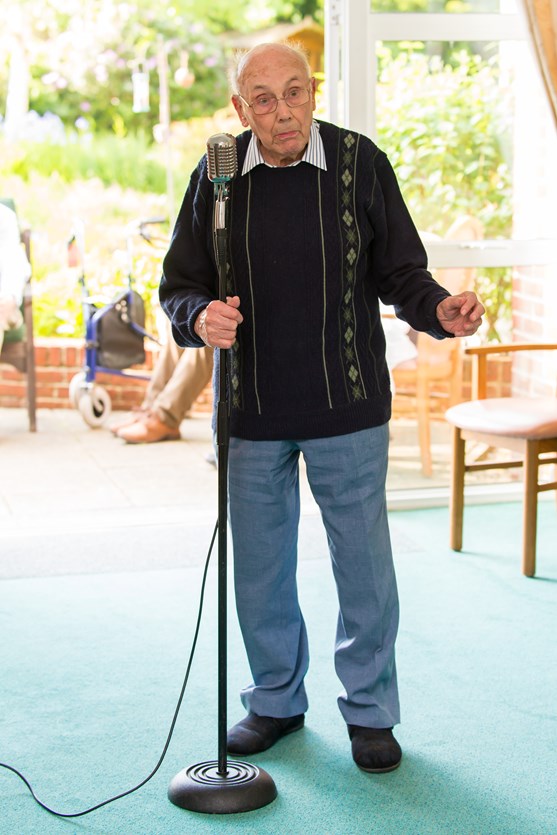 Born to parents Elizabeth and Arthur, Ronald grew up in Preston with an older brother, billy goat, two rabbits and some fish.

Aged 14, Ron left school and started an apprenticeship as a fitter and turner for S. Parker and Co, a company who diversified during World War II to make equipment and tools for the troops.

When Ron was called up for national service he joined the Navy as a mechanical engineer, working on the submarines based in Portsmouth. Ron was one of only two people qualified to build new parts for the submarine engines so his role was vital to the naval war effort.

Whilst serving in the Navy Ron met his wife Ida. Before they could get married, Ron had to ask permission of his Captain, who thankfully agreed. Ron and Ida were married on Ron’s 21st birthday in 1947. Due to limited supplies during the war, Ron was married in his naval uniform whilst Ida wore her only suit. They honeymooned in Blackpool for one week before Ron returned to his job.

After the war, Ron returned to his previous employer but this time as an unofficial director. Wanting to progress in his career, Ron left his job and joined British Aerospace where he manufactured doors for the engines of Panavia Tornado’s.

Ron was a hard worker his whole life, not only holding down full time employment at British Aerospace but also working many part-time jobs to pay for holidays with his family and to fulfil his wife’s dream of owning a fish ‘n’ chip shop. Aged 65, Ron finally retired and the couple sold their shop for £7,000.

During later life, Ida was diagnosed with dementia. Ron looked after her until she died upon which Ron decided to move south to be closer to his son.

Ron moved into Westall House three years ago and has never looked back.

“I couldn’t believe it when I got here, Westall is brilliant. I enjoy my life here thanks to the team of staff who can’t do enough for me.”

Today, Ron can be found at one of Westall’s knit and natter sessions, although Ron says, “they knit and I do the nattering.” On resident’s birthdays Ron, a keen singer, will serenade his friends with their favourite song but regardless of the day Ron is often heard singing in the hallways.

On the day we visited he was singing show tunes from Sound of Music – who needs the radio when you’ve got Ron!