Meet George, our 78 year old resident at Brian Lewis House. For 14 years, George lived and worked in Kenya starting as a business consultant and then CEO of a Credit Society which aimed to help improve the lives of Kenyan people.

Meet George, our 78 year old resident at Brian Lewis House. For 14 years, George lived and worked in Kenya starting as a business consultant and then CEO of a Credit Society which aimed to help improve the lives of Kenyan people. 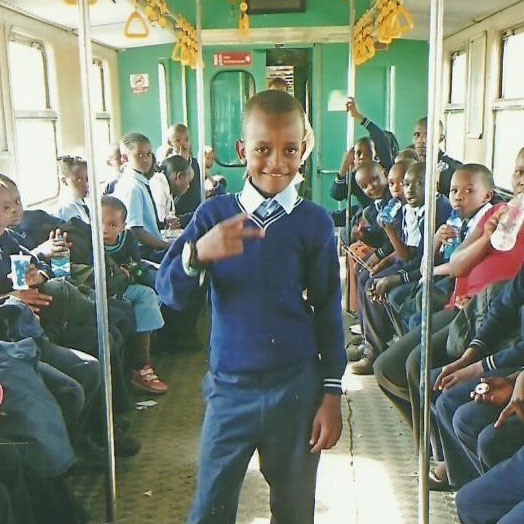 Whilst living in Africa, George employed Judy as a Housekeeper and met David, her son, whom George recognised as an unusual young man - their bond was instant and has become indelible. George soon undertook to provide David with some security and education. However fate intervened when George was forced to return to the UK because of a cancer diagnosis. This has been treated, but because he is no longer able to continue working he is struggling to continue his project of supporting and educating David.

Now living back in the UK, George is trying to continue the support that he has been giving to David and has started a Crowd Funding project which he desperately hopes will raise enough money to continue to fund David’s primary and secondary education, following which it is hoped that David will obtain a scholarship to go to University.

George said, “There are 50 million people living in Kenya, 60% of which live in extreme poverty and a majority of whom live in areas with high rates of crime. Consequently, when children leave school many have suffered insecurity at home, interrupted low quality education and poverty throughout with the result that employment is hard to find. This whole cycle then repeats from each generation to the next.

“Our sincere prayer is that through the generosity of those who may respond to this crowd funding plea it will be possible to continue to fund David’s education until he completes his primary and secondary courses. It is also hoped that, through any kind donations received that Judy’s modest earnings can be sufficiently supplemented to provide David with the stable environment needed for his strong, impressionable young mind to flourish. With the benefit of the foundation that George and his mother would like to provide, David will grow to be a leader in a country where such people are sorely needed."

If you feel able to support this crowd funding project, you can donate here.