Helping residents with dementia through the power of music

The Abbeyfield and Wesley Society is the latest Abbeyfield scheme to join forces with music and dementia charity Playlist for Life.

The Abbeyfield and Wesley Society is the latest Abbeyfield scheme to join forces with Playlist for Life, a fantastic initiative that helps residents who are living with dementia through the power of music.

In the coming months, Abbeyfield and Wesley will be offering their residents across Northern Ireland the opportunity to create their own individual playlist of personally meaningful music which may be connected to significant people, places or memories throughout their lives.

Sally Campton, Volunteer and Community Outreach Manager for Abbeyfield and Wesley, has recently been named as the first person in Northern Ireland to become a registered trainer with Playlist for Life, who are a registered UK charity. Sally will be using her new skills to train more staff, relatives and volunteers to help residents put together their playlists, creating a soundtrack to their lives. 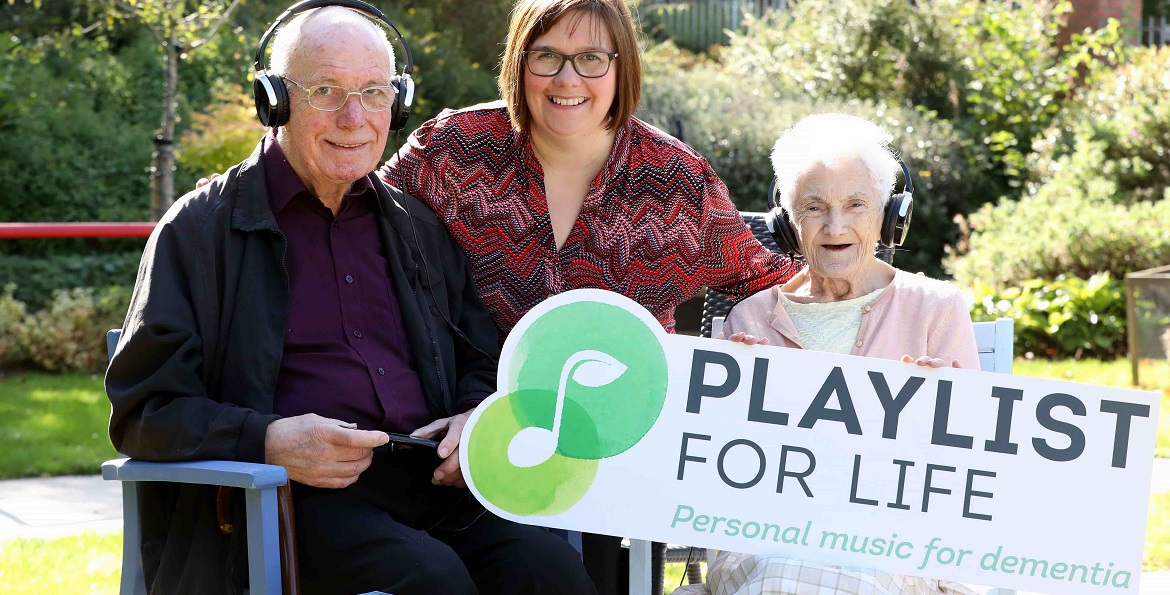 How playlists can help people with dementia

“The Playlist for Life initiative has really opened my eyes to the power of music to reach all people, but in particular those with dementia.” says Sally, who is leading on this fantastic collaboration between Playlist for Life and Abbeyfield and Wesley.

“It can alter mood and have a very calming effect, grounding people and restoring a “sense of self” if someone becomes confused. Personally meaningful music can bring back feelings, memories and sometimes even abilities that were thought lost. It can also strengthen relationships, reconnect families and, used as a therapeutic intervention, it can even help manage some of the symptoms of dementia.”

Sally goes on to say: “Playlist for Life is now going to be a regular part of the way Abbeyfield and Wesley supports our residents, in particular those living with dementia, and their families. Residents and family members have already provided very positive feedback on the initiative and have enjoyed getting involved in creating the unique and personal playlists.”

While the project is still in its infancy, there have already been some truly heartwarming moments witnessed. Claire Davies and Karen Mudge, daughters of Palmerston Care Home resident Muriel Jones, were part of the first relatives’ group to receive Playlist training through this fantastic scheme. Karen said that “Mum is sometimes quite agitated, but her music helps soothe her. And on days when she is not so engaged and non-verbal, her music lifts her. You can see her smile and there’s a thoughtfulness – you can see it must be connecting with some particular memory.”

So far, Sally has provided Playlist for Life training to 14 members of Abbeyfield staff and 7 relatives of residents living at the Palmerston Residential Care Home in East Belfast. In conjunction with Playlist for Life and BBC Music day, Abbeyfield & Wesley have just hosted Musical Tea events across all their houses in Northern Ireland.

Abbeyfield and Playlist for Life

The fantastic collaboration between Abbeyfield and Wesley and Playlist For Life comes after Abbeyfield was announced as the very first organisation in the UK to receive accreditation from Playlist for Life.

We have been both delighted and honoured to work so closely on such an important project, and have seen some great successes throughout. Being able to connect with our residents who are living with dementia through the power of music has meant a lot to them, their families and our teams of staff and volunteers.