Peta talks us through her Abbeyfield journey so far

“I’ve always wanted to do a Wing Walk” said Peta, “I’m drawn to sky. I did a Skydive just over a year and a half ago and loved it! I was one on my bucket list, that’s for sure. Then one day my sister said, ‘Do you want to do a Wing Walk?!’ and of course, I said yes."

“There I sat, strapped to the top of a fixed wing aircraft with my arms and legs free, taking off into 110 mile per hour winds. It’s just like hanging out in the sky – literally! I wasn’t nervous. I did it with my sister who is also an adventure buff – it runs in the family. We’ve raised over £1.5k for Great Ormond Street Hospital, which is a great amount for a great cause, we’re so pleased.”

Peta’s journey with Abbeyfield so far

“I’ve worked for Abbeyfield for 14 years now, in about 12 different houses. I started off managing an independent Abbeyfield in Rotherfield, I was there for three years. Following that I did regular relief work at Holdenhurst in Heathfield, and then contacted the Brighton & Hove Society about joining the team there. I did one shift in Hove, and they offered me a job as a Relief Housekeeper – I was chuffed!

“After taking on that role I made a career of going around to the Abbeyfield houses that needed help with their Housekeeping. Over the years I’ve worked at both houses in Tunbridge Wells, Tonbridge, Forest Row (where haven’t I worked?!). They’re all different in their own way, although it’s the same Abbeyfield principle and ethos throughout.

“The biggest change I recall is when Alfriston and Hove houses where combined as one. They were once very much separate – like never the Twain shall meet. Things were done in certain ways on certain days, but when Abbeyfield South Downs was formed, the decision was made to join the houses – the idea was to enable the houses to connect and come together. As well as management changes, physically knocking the houses together would make a big difference – that’s when I took over as House Manager.

“People don’t always like change, but it was a gradual thing, and it really has worked. It’s a joy to come here; the house is always full of laughter and chatter. Hove is beautiful; it’s modern, light and vibrant. We’re heading for the future, there’s always chitchat in the garden, and people spend time out of their rooms. Residents could be doing jigsaw puzzle, or having a glass of wine with a neighbour in front of the telly – it’s just homely.”

“My role on paper is to oversee the Alfriston and Hove houses, managing the staff and overseeing the running of the house, but it’s difficult to really describe it – everybody’s role is important to the running of the house. It’s very much a team environment, and the whole team care about the residents over and above anything else.

“You can’t put a label on what we do – it’s an unusual role, a little bit of everything. Some days I’m psychiatrist, confidante, cook, nurse… two things you need for certain are compassion and dedication. For me it’s never felt like going to work, it’s more like I’m going to visit my grandparents. In theory, I spend two days a week in Alfriston and three days a week in Hove. But in reality, I go where I’m needed, where there are the most things that need my attention. Every day is different, there’s no typical day because you’re dealing with such a diverse group of people.

I love to see people flourish. Some residents have lived lonely lives, but watching them thrive and enjoy life is very rewarding. Some days you think, I made a positive difference to someone’s life today. There are not many jobs that you can say that about.

“The last year has been extremely difficult. However, we have been incredibly successful in keeping all of our residents safe. Everybody’s been very respectful of the government’s guidance to keep each other safe.

“The residents really embrace the things we do, and we listen to their feedback. They are always consulted; we always ask for their opinions. For example, if we don’t know what to have for lunch, we’ll go and pick five or six people at random and ask what they’d like. Then put their ideas on the menu. Everybody has a say, what they want and what they like. Residents are involved in everything that we do here. We recently got an Amazon Echo for the house so that we could host a ‘Memories Through Music’ initiative. I wasn’t quite sure if people would use it, but now some of the residents’ dance to Rock ‘n’ Roll each afternoon!”

“I love to see people flourish and know that I made a positive difference to someone’s life each day.” 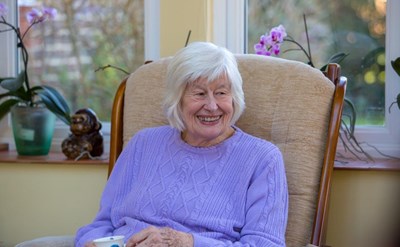 What is supported housing?

Also known as sheltered housing and assisted living, supported housing is perfect for those wanting to remain independent but live in a social, supportive house. 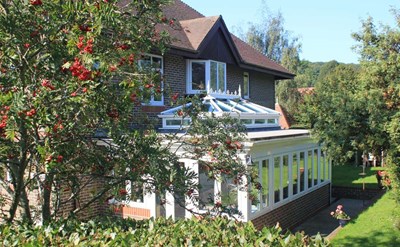 At Abbeyfield South Downs we offer a peaceful, friendly atmosphere in seven sheltered houses for the older people along the Sussex coast. 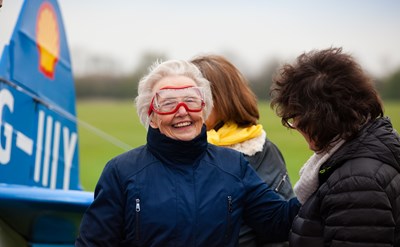 In an effort to raise the funds needed to help build a new summer house at Abbeyfield Gloucestershire Society’s Cheltenham House – Betty proved the sky's the limit to what can be accomplished!