In 1942, Joyce was volunteering for the Navy, but with WWII continuing they enlisted women as WREN’s, Women’s Royal Naval Service.

“I went for an interview and they offered me several different roles; a cook; a steward; a parachute packer. None of those really appealed so the interviewer said, ‘I have another role but I can’t tell you anything about it apart from the fact it’s called Station X’. I thought that sounds interesting so I accepted. After two weeks basic training we were put on a train and sent to Bletchley, although at the time we had no idea where we were going.

“I spent three years at Bletchley working on the machines Alan Turing invented. It was very loud, strenuous work and after a job we would have to unclip every drum on the machine and clean them ready for the next.

“Even though we knew how to conduct our job we weren’t entirely sure what we part we were playing in the war. We knew were cracking codes, but what those codes told the people above us, we didn’t know. There was an awful lot of secrecy at Bletchley, not just between our superiors and ourselves but between each other; we never spoke of what we did.

“We would work eight hour shifts at a time plugging in mainly German, but some Italian, codes into the machine and letting them run until they were essentially translated into English. You could never tell how long it would take to crack a code, sometimes it was as little as 15 minutes, other times the machine could run for eight hours. On a couple of occasions we’d be told that one of our codes was successfully cracked.” 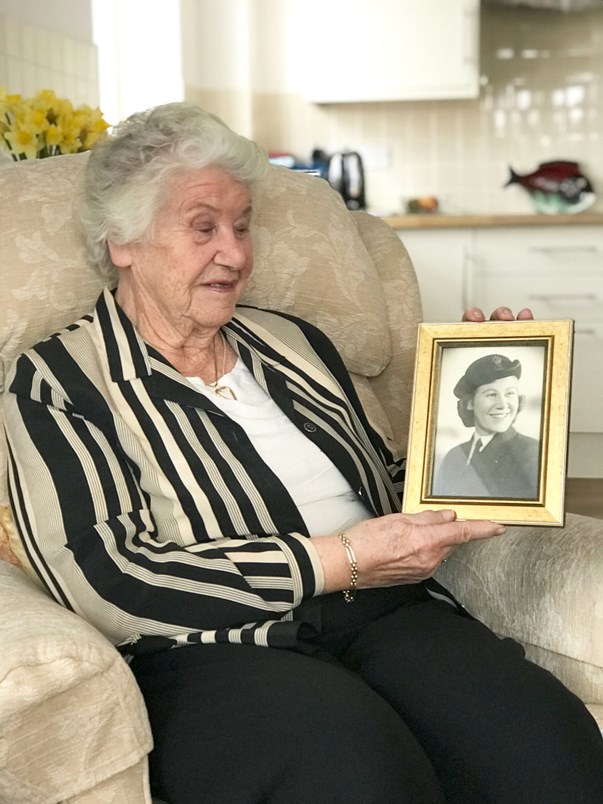 “Life was rather fun, we had a good social life and were given a day and a half off each week plus four days leave at the end of the month.

“Each month one of the four watches would take turn to host a dance but we were thrilled when we’d be invited to dances with the American troops as they had far better food than we did.

“I often saw Alan Turing during my time at Bletchley. He would come into our hut and he was always cycling around the grounds. I didn’t formally meet him but he was known as an introverted but eccentric person. Once he chained his coffee mug to a radiator so that no one else could use it.

“He was greatly admired within Bletchley, after all it was a marvellous thing to have invented. By the end of the war there were 50 of Alan’s machines in operation at seven outstations.”

End of the war and life today

“When the end of WWII was announced I was in Liverpool on the beach at Blundellsands. As soon as we heard the news we rushed into the pub and celebrated.

“After the war I was asked if I’d like to stay on in the Navy but I decided by that time I’d had enough so left to work at British Overseas Airways until I was married in 1948.

“I met my husband at a dance. He had approached me and a friend and decided because I lived closer to him that I would be the one he’d pursue. We were married in Lewisham and lived in South East London where we had two daughters. It wasn’t until 1974 when I could finally tell my husband of my job during the war. It was safe to say he was shocked when I told him I was cracking German enigma codes.”

When Joyce’s husband died she decided to move to Hale Court and live closer to one of her daughters.

“I enjoy living here. I’ve got everything I need. The staff and residents all get on very well and we truly care about each other.”

Today, Joyce enjoys playing scrabble with fellow resident (and colleague at Bletchley), Peter, and often has friends and family visiting.