Two mischievous 18-month-old alpacas have moved into Armstrong House. John and David have made a great impression on both residents and staff at the Abbeyfield Bamburgh Society on the North-East English coast.

Mike Walker, a resident for three years, has fallen under their spell. He says: “They are quite cheeky and nosy and like to come up to the windows and press their noses against the glass, wanting to get in to be with us. They are bringing a lot of pleasure to everyone. Being with them really brightens everyone’s day.”

Fellow resident Jolande Chrisp, who has lived there since 2013, adds: “John and David are wonderful, enchanting and very relaxing to watch. Everyone finds them quirky and very adorable.” 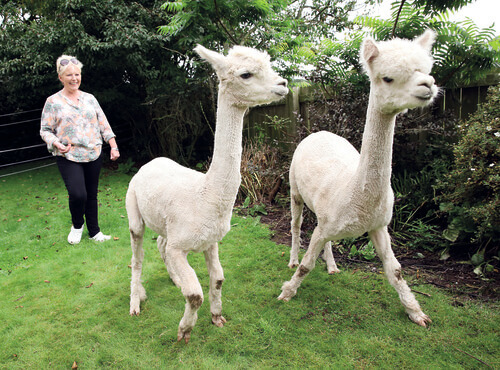 Introducing the alpacas was the idea of House Manager Paula Lingwood. She explains:  “Because our residents tend to be active in their own right we don’t run as many activities as some other places, so I thought it would be nice to introduce the animals to give everyone a shared interest.

“I know many places invite animals in to meet residents, but we decided it would be good to go one-step further and have them with us here all the time. It’s fantastic to see the pleasure they bring.”

John and David have also been getting into the Christmas spirit and participated in a recent photoshoot in their stable. It’s hoped that when they are older they will be able to venture indoors to be with the residents but, for now, they make fantastic outdoor pets.

Paula says: “They love being around humans, are easy to care for, are naturally curious and interested in their surroundings, intelligent, intuitive and have fantastic personalities. They have brought so much happiness. You could say they have brought some animal magic to Armstrong House.”