A collection of animal stories first told 40 years ago turned into a fundraising book with global sales by Abbeyfield resident, Gerry, in Westbury.

Gerry Ford, an 87-year-old resident of Abbeyfield House in Westbury, has delighted readers young and old with a special collection of animal characters and their adventures.

His book, called Animal Stories, is a compilation of stories he used to tell his children 40 years ago. Beautifully illustrated by Paul Downey, it has been sold around the world to raise funds for Dorothy House Hospice Care in Bradford-on-Avon, an organisation that is very close to Gerry’s heart.

Gerry says, “My wife, Barbara, sadly had a brain tumour. The staff at Dorothy House looked after her day and night at the end of her life, so £2 from each books goes to them. My certificate says £822 has been raised, but I’ve actually gone past £1,000 now and counting.”

“We were happily married for 51 years and it was a true love affair. I remember seeing her across the room at a party we attended, and by the end of our first date, we were head-over-heels in love.

“My children are very proud of me, and I’m sure Barbara would very happy that the stories I used to tell them are still delighting people today.”

The storybook had humble beginnings, with the characters first introduced in his children’s bedrooms after Gerry came home in the evening from his career in advertising.

“When I got home, my kids were already fed, bathed and waiting for daddy to tell them a bedtime story”, he says. “I initially wrote seven of them down, as I was a fair copywriter, and thought about getting them published, but they weren’t illustrated at that point, and at £50 a cartoon it wasn’t something I could afford. 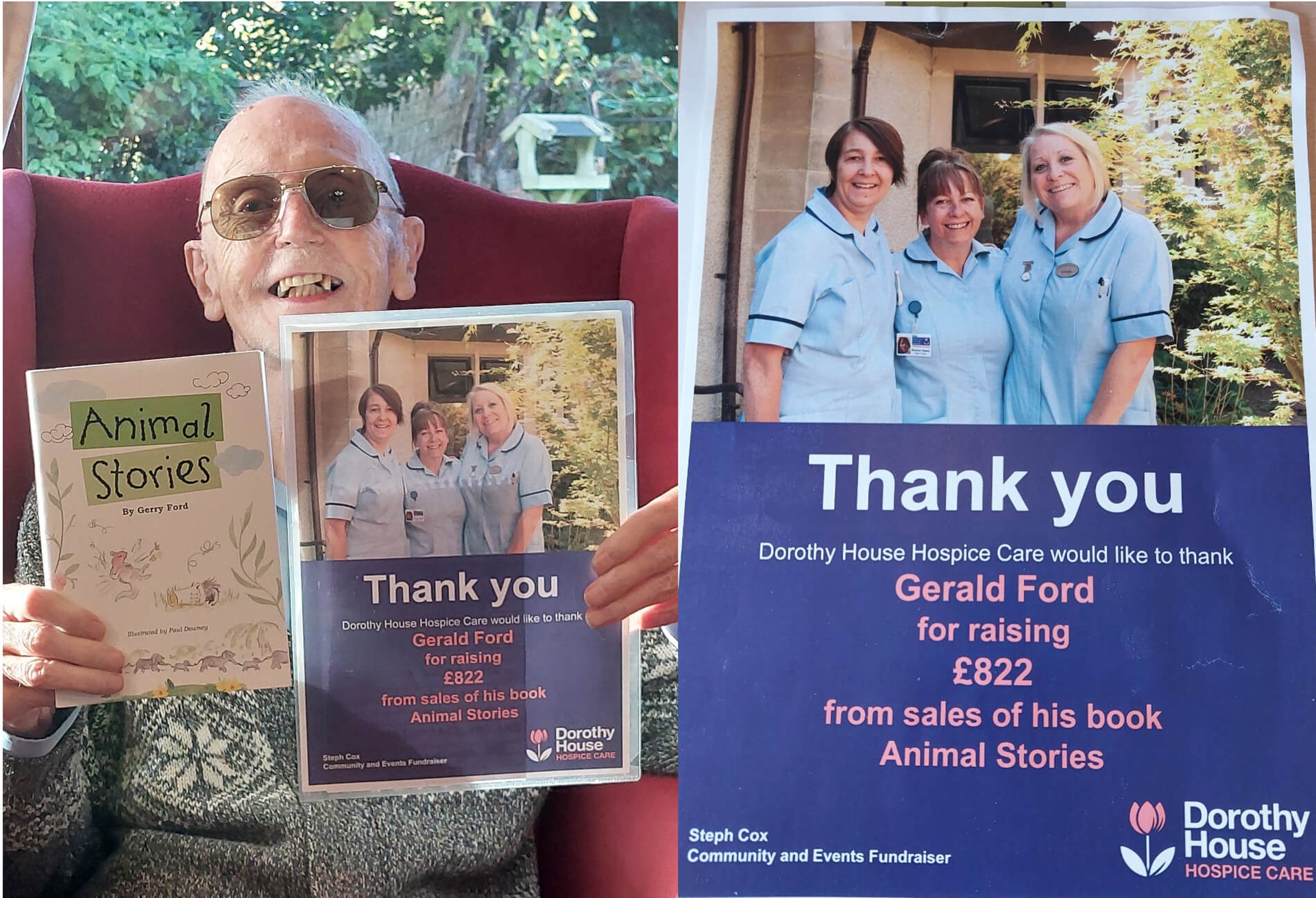 “It was Kelly Lanegan, who used to do my cleaning for me her at Abbeyfield, who encouraged me to pursue the idea of publishing them once again. I told her about them and the struggle I had earlier to get them published, and she said it would be foolish not to do anything about it.”

Gerry’s friend kindly offered to illustrate the book for free. “Paul Downey created 35 cartoons,” says Gerry, “which really helps bring the characters to life. Kelly has been my partner right the way through and I’m very grateful for her support.”

Animal Stories has not only been a success in the UK but has been delighting fans all over the world.

Gerry explains, “As a side business I used to produce little Boy Scout figures that were sold in Harrods’s, with my address was printed on the box. An American man, Dr. David Spooner, contacted me to say how much he liked them and we became very good friends over the years. He can trace his ancestors back to the crossing of the Mayflower in 1620, but despite the many degrees of separation, he refers to me as his adopted brother! He has sold a few books through his friends in the United States, and my eldest sister married a South African and moved there, so I’ve got a few customers through her too. There are also people in France and Germany who have ordered copies, so it’s a true international hit!”

Characters in the book include Baby Elephant, Donkey and Max the Kitten, but Gerry’s favourite is a puppy called Sam, who goes on a visit to Durdle Door on the Dorset coast with his family. He gets stuck trying to retrieve a football halfway up the cliff, so they call in the rescue team who manage to save Sam and his ball.

Sam’s tale is based on a true story of a trip Gerry made to Durdle Door with a youth club when he was growing up in Bournemouth. “My friend and I decided we would go up to the beach,” Gerry remembers, “but the wind came in and we didn’t fancy going up the long zigzag to the top. We made the ill-fated decision to go straight up, and my friend went first. He got stuck halfway up, so I had to slide down on my tummy, run up the zigzag, and for the first time in my life I dialed 999. Fortunately the rescue team were able to bring him down safely.”

Gerry has lived at Abbeyfield House for a long time. In the attractive 12-room house, he found a place to perfect and sell his book, and he is proud to call it his home.

Gerry says, “When Barbara passed away, I struggled to cope on my own. I wasn’t eating properly and started to lose a lot of weight. My daughter, who lived a few doors down from me at the time, suggested we look for somewhere more suitable to live. She found Abbeyfield House, and I’ve been here for over five years. It means I’m one of the older serving residents and I’ve got a lovely big bedroom and bathroom to myself.

“I enjoy meeting the new prospective residents and showing them around. I like to chat a lot, to everyone, as I read in a newspaper that a simple conversation can help keep the effects of dementia at bay. We’re taking on a new member of staff soon who will be running a coffee morning, which will give me many more opportunities for chatting!”

Read more stories from some of our incredible residents.

Resident of Abbeyfield House, sheltered housing in Beccles, David, tells his story of National Service on the lead British aircraft carrier of World War 2; HMS Illustrious, becoming an author and his passion for agriculture.

The Remarkable Life of John Flanner

Resident of Hampton House, John Flanner MBE is a man with a life-changing story that has the power to revolutionize your life, transform your work environment, and turn your view of diversity and equality on its head.

Bradbury House resident Bernard Clipsham tells us about his hobby of model making, and how he came to create a whole miniature village.