An inspirational volunteer who has dedicated much of his adult life to serving his community – including his local Abbeyfield Society care home – says he feels “incredibly honoured and humbled” to have been recognised in the Queen’s Birthday Honours list.

Jim Thompson, who donates up to 16 hours a week of his own time to helping out at Abbeyfield House in Alnwick, Northumberland, has been rewarded with a British Empire Medal (BEM).

Jim, 74, who is chair of Abbeyfield North Northumberland Extra Care Society’s executive committee, which oversees the running of the residential care home on the outskirts of Alnwick, says the honour has come as a shock, and admits when he first found out about it, he thought it was a hoax!

“I received the letter notifying me of the award about two months ago. I said to my wife, ‘have a read of that. It can’t be correct.’ Then I got a follow up phone call confirming it was true,” the grandfather of five explains. 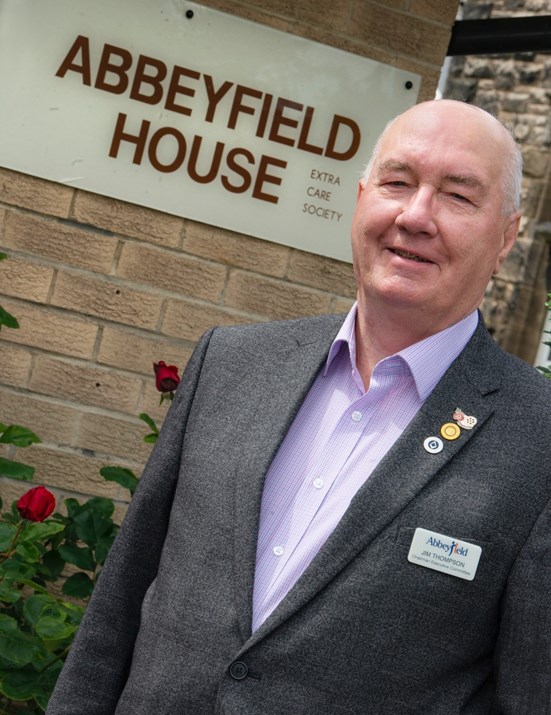 “It’s still difficult to take it in. I feel incredibly honoured and humbled to be receiving an award for something I like doing.”

But Jim, who enjoyed a distinguished career with the fire service and on retiring was Area Commander for north Northumberland, says while he may be the one receiving the BEM, he doubts he would have been worthy of the nomination without the guidance, help and support of his family and fellow volunteers.

“I wouldn’t have been able to achieve a half of what I have without the help and support of my wife, Linda, and the many other volunteers I have had the privilege to work alongside over the years, all of whom have inspired me.

“I accept this honour on behalf of all the volunteers, not just myself.”

Jim joined the executive committee at Abbeyfield House in Alnwick in 2005, taking over as chair in 2014. Made up of a team of eight volunteers, the committee oversees the finances and strategic running of the home.

Since taking over as chair, Jim has recruited new members to the Executive Committee, built a team of other volunteers, and masterminded major improvements at Abbeyfield House.

He has also been instrumental in setting up partnership working with Rotary in Alnwick – which was amongst the founders of Abbeyfield House in the early 1980s – as well as Rotakids, the youth section of the international service organisation, whose members regularly pop by to chat with residents and help organise events.

Away from Abbeyfield, Jim is a past chairman of Alnwick Round Table, a founding member of the Lions, a keen Freemason, and a Rotarian. He is a past president of the Rotary Club of Alnwick – a role he is due to take on again in 2020.

Asked what motivates his philanthropic endeavours, he says: “I come from quite a poor background, and both Linda and I have always felt it’s important to support those who are less fortunate than ourselves.

“We are self-made, and we are conscious of those who have been unable to move on themselves.”

“Abbeyfield House is a very worthy cause. Run as a not for profit organisation, we raise money where we can and spend it wisely for the benefit of the residents. They are a lovely group, and I get great satisfaction from seeing them enjoying the autumn of their lives.”

David McCullough, chief executive of the Abbeyfield Society, offered his congratulations to Jim.

“Jim very much deserves this honour for his dedicated support of Abbeyfield House, its staff and residents over so many years.

“Everyone within the Abbeyfield Society is delighted that the massive contribution he has made not just at Abbeyfield House, but across his community in Alnwick since the 1960s, has been recognised with such a high profile honour.

“He is knowledgeable, is respected by staff, other volunteers and residents, and gets on with what he has to in a professional and unassuming way. Jim’s award is a tribute to the hard work and dedication of the thousands of amazing people who do so much to ensure the Abbeyfield Society can continue its vital work and role in the wider community.”

Congratulations, Jim. What a fantastic achievement.

Get hooked by this knitted Christmas bauble